This Vegan French Onion Soup will warm you up as we enter into the cooling days of fall. If you’re like us, you probably love the warm, comforting taste of a hot bowl of soup when it’s cool outside. We love making soups and homemade is really the best way to enjoy them.

The Broth in our Vegan French Onion Soup

Julia Child said to her viewers in her 1960’s television cooking show, The French Chef, that if you are going to use store-bought stock to make your french onion soup, you may as well just buy french onion soup. We often use a good quality vegetable stock from the grocer when we’re preparing soups and stews. However, the stock is often not such a key part of the flavour profile. It’s a much different story with french onion soup. Your soup will only taste as good as your both and the caramelized onions that you take the time that is necessary to prepare.

You can certainly use store-bought vegetable stock in a pinch. However, we highly recommend that you consider making our Easy Homemade Vegetable Broth, pictured below, that we put up on the blog just recently. Prepare it a day (or more) ahead and your french onion soup will be next level!

If you are looking at recipes for french onion soup that suggest that onions can be caramelized in 30 minutes, please look a little further. Caramelizing onions requires a minimum of 45 minutes and up to 1 hour and 15 minutes. The length of time really does depend on how browned and how sweet you would like them to be. For this soup, we would suggest a minimum of 1 hour. The process slowly brings out the deep, rich and sweet flavour as the natural sugars in the onions caramelize. There is no need to add refined sugar. With a little patience and 4 tbsp of vegan butter, we caramelized 3 lbs of onion in two iron skillets in 1 hour and 15 minutes. The results are shown below.

We deglazed with white wine to loosen any browned onion sticking to the skillets, before transferring the contents of both skillets to a dutch oven or ‘cocotte’. We then added 8 cups of our prepared and re-heated vegetable broth to the soup pot. Tie the springs of fresh thyme together as a ‘bouquet garni’ and add these to the pot as well. This makes it easier to remove the stalks when the soup is done. Finally, we tossed in 2 bay leaves. After bringing the soup to a slow simmer over about 10 minutes, we covered the pot and left it for 30 minutes to further develop the flavours and infuse the herbs.

Topping off Your French Onion Soup

We used some toasted baguette slices and some cashew based mozzarella to top off our french onion soup in typical fashion. Grate the cheese over the toasted baguette slices sitting atop the soup and place under the broiler. We totally splurged on these miniature cast iron cocottes to serve the soup. Just make sure that whichever bowls you serve your soup in are also oven safe.

This Vegan French Onion Soup is full of depth and richness! Try it and let us know in the comments below what you think. Don’t forget to also leave a rating and snap a photo. Show us yours by tagging us @plantedandpicked on Instagram and hashtag it #plantedandpicked. “Cooking is like love. It should be entered into with abandon or not at all” – Harriet Van Horne 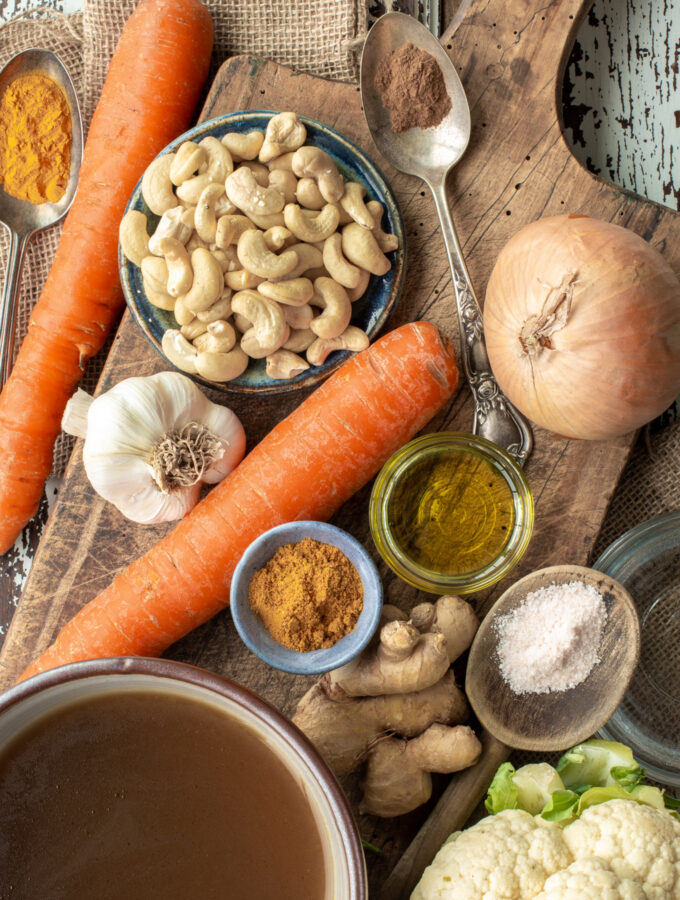 Autumn is in the air and it smells lovely. We’re

This Flavourful Falafel Recipe is a staple in our

We’re resting and restoring at the wonderful Gra

We’ve fallen in love with this creamy Moroccan L

This basic mung dal recipe is super easy and versa

A great before dinner treat of our classic baba ga

We’ve bumped up the nutrients in our meal with t

@onegreenplanet is giving a big shoutout to the ki

@onegreenplanet is introducing their first #plantb

There was a time when you wouldn’t find a househ

Okay, you have got to try this. Sandra baked up th